Currently, the DOPE Project is the largest single-city naloxone distribution program in the country, responsible for training over 13,000 people in San Francisco. People who use drugs, their loved ones, and surrounding community members are responsible for reversing on average 1,500 overdoses a year with DOPE Project naloxone. 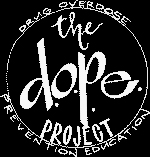 Participants reported that 89% (of overdoses) were reversed.

“From September 2003 to December 2009, 1,942 individuals were trained and prescribed naloxone through the DOPE Project, of whom 24% returned to receive a naloxone refill, and 11% reported using naloxone during an overdose event. Of 399 overdose events where naloxone was used, participants reported that 89% were reversed. In addition, 83% of participants who reported overdose reversal attributed the reversal to their administration of naloxone, and fewer than 1% reported serious adverse effects. Findings from the DOPE Project add to a growing body of research that suggests that IDUs at high risk of witnessing overdose events are willing to be trained on overdose response strategies and use take-home naloxone during overdose events to prevent deaths.”  (Enteen et al., 2017)